When we talk of the patterns of population density or the decennial growth rates, the distinction between the urban and the rural segment assumes significance. The urban population in Indian is growing – some say it is growing significantly faster than the rural population. Is that really the case? It is important to check this out on the basis of the census data on urbanization in India for 2001 and 2011. Is the popular perception that the urban population is growing rapidly correct, or does it need to be qualified? This is important since the perception of population ‘explosion’, nurtured and strongly believed in, by the urban elite does form the basis of many of our policy prescriptions and attitude towards the poor and the women.

Table 1 gives the % urban population in various states in 2001 and 2011. The urbanization levels vary widely from state to state ranging from a very low level of urban population even in 2011, in Himachal (10%), Bihar (11.3%) and Assam (14.1%). If we see the map for 2001, however, we see a contiguous belt of northern and eastern states with less than 27% urban population. Even in 2011 the pattern remains similar if we raise the cut-off to 31.4%. Two notable exceptions are Kerala and Goa in the south where the urban population has jumped from 26% to 46% for Kerala and from 50% to 62% for Goa. In the north east, Sikkim, Nagaland and Tripura have urbanized significantly. West Bengal’s urbanization is historical in nature but one can see that its urbanization has not had the kind of spread effect that we see in south and the west and even in the Punjab, Haryana and Uttarakhand belt.

A revision of cut-off levels to 19%, and 25% respectively, shows that the relative pattern of urbanization has remained nearly similar.

Interestingly, the modification in the cut off for the low, medium and high urban population % regions for pattern of relative urbanization similar to that in 2001 is well below the all India increase of above 3% in the urban population%. How do we account for this? Probably the more urbanized regions are urbanizing more rapidly?

More interestingly however, if we see the relation between the % urban population in 2001 and that in the 2011 through a regression analysis for the four categories of districts, an interesting feature emerges. This is shown in the 4 equations below; 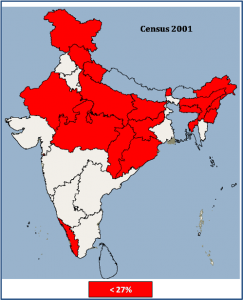 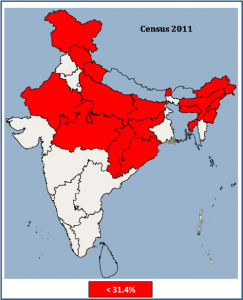 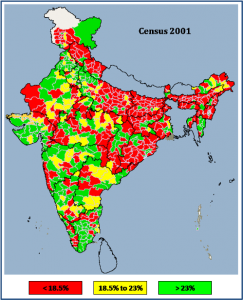 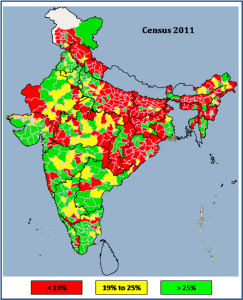