Viewers are welcome to fine tune the analysis further.

The Indian landscape can roughly be divided into three categories based on whether the population density is low, medium or high. In 2001 the cut off levels of less than 170 persons per sq km, 170 – 285 persons per sq km and above 285 persons per sq km give three contiguous belts where the population density can be considered to be high. In 2011 the density is expected to grow. What is remarkable, however, is that the same spatial classification persists if the levels are adjusted to 195 in place of 170 and 340 in the place of 285.

This is consistent with the overall growth % of 17.5% at all India level.

[Following analysis can be skipped by viewers without loss of continuity, the statistics savvy viewers may engage with it further]

However, it the district level the picture may change. It is instructive to see has the low, medium and high density regions have experienced the change in population density.

An interesting point arises here. Contrary to the general perception that lays all the blame of underdevelopment at the door-steps of population growth, we get a more nuanced pattern. We have low density regions with high as well as low levels of development and equally importantly there are high density districts which are developed as well as underdeveloped. 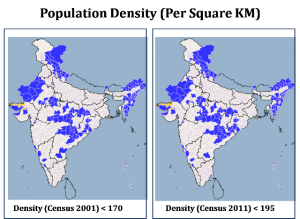 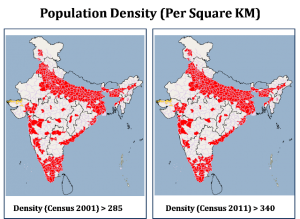 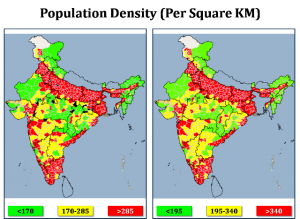